Peanut butter may not be the first treat that springs to mind when it comes to your kitty. But, you… The post Can Cats Eat Peanut Butter? appeared first on Mad Paws.

Peanut butter may not be the first treat that springs to mind when it comes to your kitty. But, you may still be curious as to whether they can eat it. Perhaps they’ve expressed some interest in this sweet and salty spread, or you’re thinking about using it as a medication aid. Dogs and peanut butter are a well-known combo, but what about our feline friends? Can cats eat peanut butter, too?

While we were hoping to give you a definitive answer, it turns out this question isn’t so straightforward…

Well, yes and no. Peanut butter is considered a safe human food for cats, but that doesn’t necessarily mean they should eat it. It provides basically no nutritional value to cats, and their bodies aren’t built to digest it.

This is because cats are carnivores, meaning they get their nutrition from meat. As a plant food, peanut butter obviously doesn’t sit in this category. It’s lacking in the amino acids delivered by meat that cats really need.

Peanut butter is also tricky for cats to digest. Plus, it’s incredibly energy-dense, so if consumed in large enough quantities, it can lead to weight gain.

Is peanut butter toxic to cats?

Even though they shouldn’t really eat peanut butter, you can rest easy knowing your cat probably won’t get sick if they ingest a small amount of it. Peanut butter isn’t toxic to cats – it’s just not that great for them.

That being said, there are a few sneaky ingredients in some types of peanut butter that can pose problems: 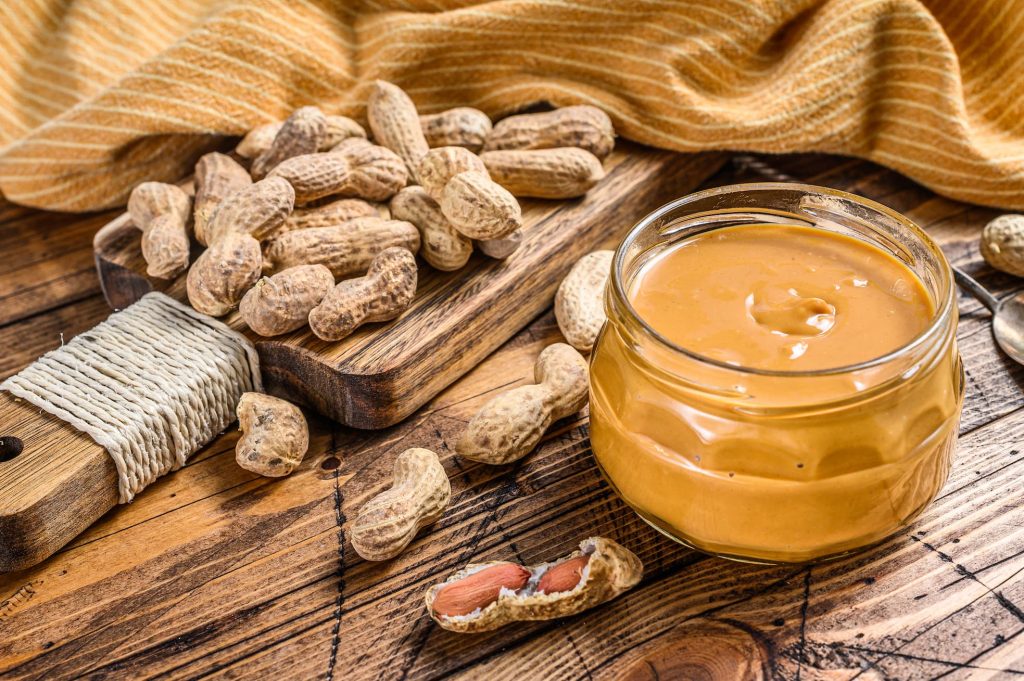 What are some of the other risks involved with cats and peanut butter?

Aside from it offering next to no nutritional value, there are a few things to know about feeding peanut butter to your cat.

It’s high in fat and salt, and sometimes sugar

Peanut butter is known for being high in fat. This isn’t necessarily a bad thing for us humans (it contains healthy monounsaturated and polyunsaturated fatty acids) but it’s not good for cats.

Too much fat can lead to weight gain, or even more serious health issues like obesity and diabetes. If you’ve got an indoor cat, the risk is even higher. Given their lower activity levels, indoor cats are already prone to putting on weight. And peanut butter only adds fuel to the fire. (As a side note, if you’ve got a cat that could shed a few pounds, here are some tips for cat weight loss.)

Salt is another common ingredient in many peanut butters. Much like fat, if a cat eats too much sodium, it can lead to issues like diarrhea, vomiting, excessive thirst, frequent urination, or even long-term conditions, such as high blood pressure or heart problems.

Today, many peanut butters are sugar-free and only made with nuts and a bit of salt. But there’s still a number of peanut butters on the market that are high in sugar. Sugar isn’t toxic to cats. However, large quantities of it can result in health conditions such as obesity, diabetes, or dental disease.

It doesn’t really gel with their digestive system

Another issue with the fats, plus the protein, in peanut butter is that they’re hard for cats to digest. Their systems are built for animal products, not sticky, plant-based peanut butter. So, an excessive amount of the stuff can cause gastrointestinal upset. Symptoms of this include tummy pain, gas, diarrhea, and vomiting.

They could be allergic

Food allergies among cats aren’t overly common, but they do exist. Some cats are allergic to peanuts – and, consequently, peanut butter – and simply won’t tolerate even a bit of it.

If your cat eats some peanut butter for the first time, make sure to watch for an allergic reaction. Symptoms include vomiting, diarrhea, decrease in appetite, sudden weight loss, skin irritation, hair loss, or swelling of the face.

If you notice any of these, take your cat to the vet immediately so they can address the allergy. In very extreme cases, a peanut allergy can be life-threatening.

They could choke on it

The creamy, slightly tacky, texture of peanut butter is easily one of its main draws – for us, at least. For cats, though, it’s a very different story. Even a small amount of it can get stuck in their throat, making it a potential choking hazard.

They run the risk of poisoning

Sometimes, peanut butter is used as a lure in rodent or insect bait. In this instance, it’s obviously mixed with poison. Cats could very well get confused and try to go for the bait, resulting in accidental poisoning (and, no doubt, a lot of tears).

Can cats eat peanut butter under any circumstances at all?

Many animal experts agree that there’s one situation where peanut butter is OK: when you’re giving your cat medication. You may find it easier to administer a pill if it’s coated in a tiny bit of peanut butter, which makes it more appetising to your cat.

If you’d like to employ peanut butter as a medication aid, use the smallest amount possible to coat the pill. Give your cat access to clean water so that they can easily wash the peanut butter down.

As well, make sure to supervise them to watch for signs of an allergic reaction, and never leave them unattended – this is to minimise the chance of choking. Lastly, stick to peanut butter that’s made with 100 percent nuts. That way, you know your cat won’t be eating excess salt and sugar.

And if your cat is under the care of your local Cat Sitter at any point during a course of medication, make sure to pass these tips on to them, too!

Why Does My Golden Retriever Smell?

8 Ways You Can Be The Best Pet Parent Ever

What’s In Your Dog’s Bowl?

Lots of times new year resolutions bring plans of dieting, but have you considered...

How To Potty Train Your Dog in the Right Way

Bringing home a puppy or dog can turn out to be a great and fulfilling experience...

Cat Losing Hair On Ears: 6 Reasons Your Feline’s Fur Is...

If you notice hair loss on your cat’s head or around its ears, you may become concerned...

It’s Your First Night With A New Puppy, What Should You...

Getting a new puppy and bringing it home is the day every dog owner remembers. But...

Wanna spoil your pup this Valentine's day? We are happy to help, check out our dog...