Dog Population In The World

Dog Population In The World 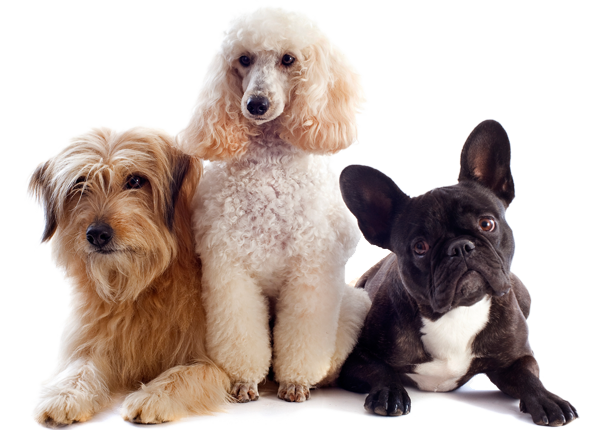 The first thing that comes to our mind when we think about canines is the picture of a pet dog. It is not surprising, as pups are by far the most popular type of pets. But did you know that pets make up only the small part of the world’s total canine population?

It is rather hard to estimate how many dogs there are in the world today. That is because a vast number of them live as free-range pups, and the figures can’t be determined accurately. According to the most recent estimations, there are approximately 900 million pooches around the globe.

Some of these roam the streets of towns and villages freely or live as wild dogs, others are domesticated and used as working pups or simply enjoy the happy and pampered life of companion dogs. We will provide an overview of important numbers when it comes to all the pooches living in the world today.

Determining the exact number of pups that inhabit our planet is a bit of a challenge. The fact that many of them live on their own, rather than side by side with people, presents the main obstacle to providing accurate figures.

According to 2012 data, there were around 525 million canines in the world. This figure has grown considerably until the present day, so today, it is estimated to be about 900 million pooches.

Canines that do not have a home and are not owned by people are referred to as free-range pooches. They are the most numerous group, estimated to make up between 75% and 85% of all dogs. It is possible to distinguish between several subcategories of free-range pups, including wild, feral, stray, city, and village ones.

According to data provided by the WHO, there are 200 million stray dogs in total. Unlike feral pooches that have not been socialized and are not used to any contact with people, stray dogs have, at some point, been through the socialization process.

The Population of
Owned Dogs

Statistics related to canine ownership vary across different countries. Nevertheless, the task of calculating the number of canines owned by people around the globe is far less complicated than it is the case with free-range ones.

The reason for this lies in the fact that many countries have introduced legal regulations on mandatory registration of household animals. 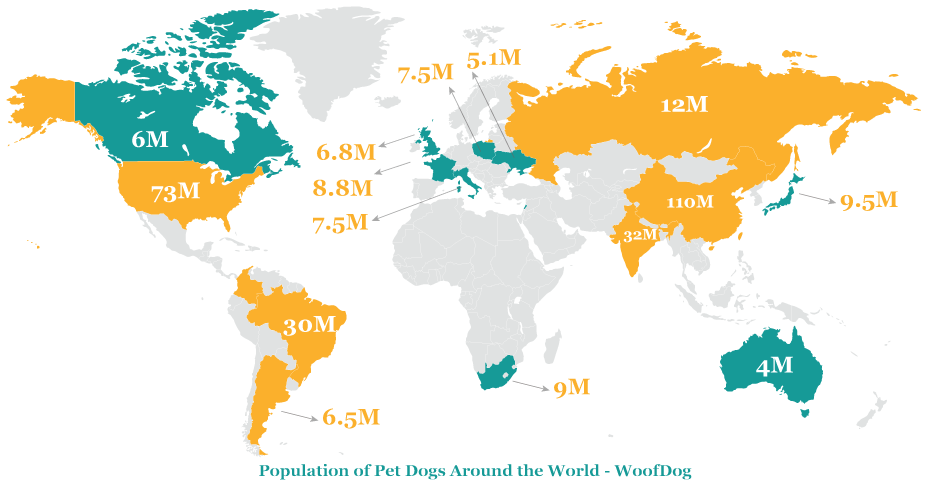 Number of Dogs Per Continent

A lot of Asian countries do not make it obligatory for owners to register their pups. That makes the calculation of the total number of canines a bit unreliable. According to available data, the most significant number of pet pooches is kept in China and is estimated to 110 million.

People in India keep around 32 million pups in their homes. Yet, the population of stray ones is vast, with approximately 20 million of such pups. About 9.5 million canines are owned by Japanese people.

There seems to be a high number of pups kept as pets in Western Europe. In total, it is estimated at 43 million. The French seem to be the greatest dog lovers, with around 8.8 million household canines. They are followed by Italy and Poland – both countries featuring 7.5 million pooches. There are nearly 6.8 million tail-waggers in the United Kingdom.

Russia has the highest number of pups in Eastern Europe, and this figure reaches 12 million. The second most numerous canine population is found in Ukraine, and it amounts to 5.1 million.

It is almost impossible to determine the precise number of canines in South America, due to the lack of strict registration policies.

It is, however, believed that Brazil tops the table of South American countries, with more than 30 million pet dogs. Argentina has the second largest population of 6.5 million, whereas Columbia features the figure of 5 million.

Data available on the total canine population in North America is more accurate than with some other parts of the world. It is estimated that the number of pooches reaches 73 million.

Over 42.5 million homes across the States are home to one or more pups. At the same time, around 6 million pooches live on the territory of Canada.

Only one country on the African continent has reliable data related to the total number of canines living in it. According to reports, South Africa is home to around 9 million pooches.

In their attempt to combat the epidemics of rabies in Africa, the estimations provided by the WHO state that the number of pets reaches 78 million, whereas the number of stray pups amounts to over 70 million.

It is difficult to provide precise numbers when dogs living on the Australian continent are in question. This is because a high number of these animals are uncounted and not registered.

Roughly speaking, Australians keep about 4 million pet pooches. It is estimated that the population of stray animals includes around 2 million specimens. 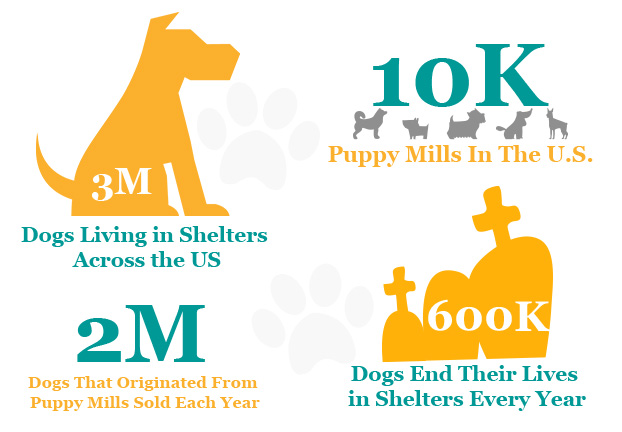 Dog Statistics in the U.S.

Americans are known to be passionate owners of pet dogs, who are ready to go to great lengths to pamper their furry friends. At the same time, a large number of canines perform various types of work alongside people, making a significant contribution to society.

The number of pups accepted to shelters has dropped from 3.9 to 3.3 million since 2011. The rate of euthanasia has also decreased compared to previous years, with 670.000 euthanized animals. About 1.6 rescue pooches find their second home every year in the States, while 620.000 reunite with their owners after being placed in a shelter.

A third of all American pet pooches are typically bought from breeders. At the same time, around 23% are adopted from a shelter (read more about the benefits of adopting a dog).

Countries That Have The Most Number of Dog Owners

The French are known to love their pet pups as much as they love the members of their family. Namely, France is a country with one of the highest dog per person ratios – 17 to 100, which ranks it as one of the world’s biggest dog-loving countries. In total, there are approximately 7.5 million pooches in France.

More than 9 million pooches share their home with people in the U.K., which has a long tradition of canine ownership. Although the ownership figures have not been rising significantly, there seems to be more and more pooches kept as pets. One in four households in the U.K. has at least one furry-friend.

According to official data, the dog population in Argentina has reached a figure of 10 million. More and more Argentinians decide to parent a pup, which is mainly seen as the result of the country’s growing economy and a diverse pet product market.

More and more Japanese people opt for parenting a pet, instead of starting a family and getting children. This is the result of a hectic lifestyle and work culture. According to statistics, there are about 9.5 million household canines in Japan.

The pet product industry is seeing its golden age owing to this trend, too.

It is believed that there are about 12 million canines in the Philippines. It is essential to mention that this country has been struggling with a severe rate of rabies-related deaths. That is why the authorities are putting a lot of effort into putting the population of stray pooches under control.

Russia is the home to a massive population of these animals, both owner and stray ones. The group of free-range ones is rather large and is thought to descend from ancient Russian packs. According to official data, taken together, the number of all pooches in Russia amounts to approximately 12 million animals.

More than 30 million pooches live in India – mostly in the streets of towns and villages. They have adapted to such a lifestyle and manage to survive on their own. A legal act on Animal Birth Control brought up in 2001 makes it illegal to kill stray canines.

People in India have a reputation of being very tolerant and friendly towards these animals living on the street.

How Many Dog Breeds Are in The World?

The list of dog breeds officially issued by the American Kennel Club includes 190 recognized types and varieties. This list is much longer when it comes to all the recognized breeds in the world, and hits the number of 360 (check our guide for rare dog breeds). It should be noted that mixed-breeds, and designer cross-breeds such as the puggle ( pug + beagle) are not enlisted here.

Click here to find out how are new dog breeds created.

Is there an animal whose affection, loyalty, playfulness, and intelligence can compare to that of a pup? Any dog lover’s answer to this question will instantly be “no”. It’s no wonder that canines and people have grown to become inseparable over the long course of years.

There is almost no place on this planet which is not populated by pooches – either as people’s companions and helpers, or free-ranging canines surviving on their own. By writing this article, we hope we have managed to paint a clearer picture of what the worlds’ population of dogs looks like today in terms of basic statistics and general figures.

• The 10 Best Dog Breeds for Children

• How many Americans have pets? An investigation of fuzzy statistics – washingtonpost.com

The post Dog Population In The World appeared first on Woof Dog.

Strengthening the Bond Between Human & Dog

How To Become An Official Minnesota Snow Hound

How to Socialize an Unvaccinated Puppy

A Visit by the Ambassador (and Official Attache)

9 Tips For Flying With A Pet

HOW TO WEIGH YOUR CAT

Are Dogs Ticklish? – Understanding The Science Behind Ticklish...

Today’s question: Are dogs ticklish? Dogs are ticklish in the same way that most...

The Dogs are LOVING This Trip!

How To Prevent Ear Infections in Dogs

Ear infections in dogs are common but can be harmful and cause a lot of pain and...