Greyhounds! – Incredible Facts About the STRANGEST Dog Breed in 2022

Don't think Greyhounds are too extraordinary? But have you ever wondered how a greyhound can reach speeds of over 40mph? Read these weird facts about what makes this special breed the fastest dog on the planet!

One very unusual dog breed is the greyhound! Don’t think it’s too extraordinary? Read on!

Greyhounds were originally bred for coursing game animals and of course racing for sport.

But have you ever wondered how a greyhound can reach speeds of 40+mph? (And nearly 20 meters per second at the start of a race?!).

When racing a hound can actually lose 5lbs in a single race!

Here are a few facts that make this breed of dog quite extraordinary.

Interestingly they also have only HALF the platelets that other dog breeds have, making them ideal blood donors for dogs in need.

Greyhounds have a much larger heart when compared to their body than other breeds and with a beat which is much slower.

Their lungs are also the largest in comparison to its body than any other breed. 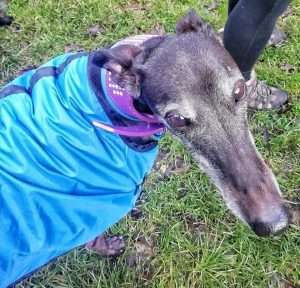 The gait of a greyhound is known as a “double suspension gallop” where all feet are off the ground in 2 phases of running.

This means this dog spends 75% of his time in the air!

Again only in greyhounds (and similar sighthounds).

They also have a flexible spine that literally acts like a spring, propelling them forwards; there was an old saying that a good dip in a greyhound’s back should be able to hold an egg!

IMPORTANT! -What Your Greyhound Vet Should Know!

As you’ve already seen, a greyhound’s physiology is very different from other breeds.

This is why it’s so important to have a knowledgeable vet that knows greyhounds. Always check they know these;

In other dogs these levels would actually indicate kidney disease but the results are different for greyhounds, because of the much higher muscle mass.

Your vet should already know these details, as they have to keep up to date with the latest information but it’s always worth checking beforehand.

Greyhounds are not normal dogs!

Its very common for greys to develop bald spots on their tummies and bums, often caused by diet and where they lay, there is a VERY simple way of curing this- add cod liver oil to the diet. Within a few weeks the hair will have grown back. 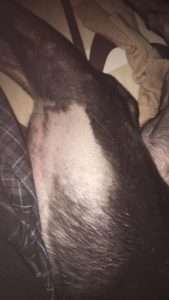 This breed is so well adapted, if you look at the structure of a greyhound’s paw, against other breeds, you will see big differences.

Their second set of toes are almost directly behind the front 2, rather than 4 in a circular row, like on a regular dog’s paw.

This makes for better contact on the ground and better grip.

You can see this even more in the prints below!

These were taken as each dog moved naturally.

The back feet, in fact, are almost starting to look like a deer’s foot, where the toes are in two separate rows.

These dogs are so gentle and loving. Their temperament is one of being sweet hearted and quiet, a perfect companion.

They fit in so well with family life – they are literally couch potatoes!

You will find your hound is normally asleep (on a sofa) and needs surprisingly little exercise. 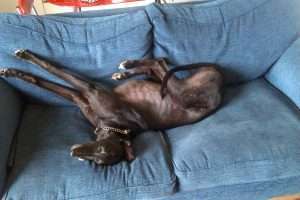 Greyhounds get on well with other dogs but tend to be aloof and ignore them, preferring other sighthounds (It’s a very elite club!).

The majority of greyhound pets come from the racing industry.

A greyhound retires from racing between 2 and 5 years but can live happily past 12 years and beyond!

On a sad note not all greyhounds get to retire, in 2017, 1,000 greyhounds were either too badly injured on the track to treat, or put to sleep because not enough homes could be found (UK).

Some greyhounds have a very strong prey drive when they retire and need some help realizing that smaller dogs are not in fact, rabbits!

A lot of greyhounds have never even seen a different breed of dog, other than their own, so this is hardly surprising!

Recall can also be an issue, however this can all be rectified with good training techniques and lots of patience. 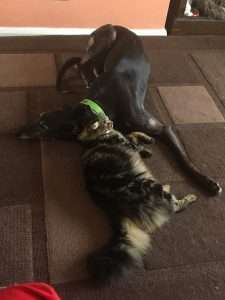 Cat and small animal introductions can also be successful with your greyhound (even ex-racers), however be sure to get the help of an experienced behaviourist.

Sky orginally wanted to kill all cats and it took 3 months of every day training before she realised the cat was part of our family. Since she realised this she has never relapsed in 7 years, with Captain.

Do You Need Training for Your Greyhound?

Why do Greyhounds Lean?

One common trait among these dogs is that they will lean on you.

Some other dogs do this too but it is a very common greyhound trait.

So why do greyhounds lean? Are they tired or asking for a cuddle?

Actually neither of these reasons.

Greyhounds, like all dogs, build their relationships based on space- who gives space and who takes space.

Most people will give their space by stepping back or not at all. This way of space taking is very non confrontational however.

Greyhounds really don’t like confrontation at all, which makes them also masters of calming signals! 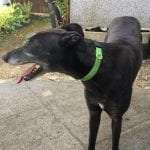 They perform an excellent head turn (as pictured) when they think things are getting too stressful. This is to tell everyone they mean no harm, or to calm down.

This is a fantastic breed of dog and fits in very quickly to family life.

They come in over 30 colours ( with black being the hardest to rehome) and there are many dog rescue centres specialising in saving these gentle athletes.

A truly remarkable animal and one who definitely makes the unusual breed list! Below are a couple of links to some great UK rescues, why not take a look and see if you can find a friend today?

15 Best Foods for Maltese with Allergies

Dog Boredom: How To Keep a Bored Dog Occupied!

Tips for Keeping your Dog Safe During the Holidays

If you want your dog off leash, you must follow the rules!

Seattle Firefighters Rescued Over 100 Dogs from A Fire...

Episode 324:How To Find A Business Mentor That Will Help...

Are you feeling lost and unsure of where to turn as you navigate the challenges...

Essential Oils for Dogs: An Insider’s Guide to the Skin...

When To Say Goodbye To Your Dog With Cancer

Many dog cancers are treatable, but how do you know when to say goodbye to your...