What’s the Rush? Terie Hansen As the saying goes “You don’t get a second chance to make a first impression”. The same applies when introducing a new dog/puppy to your current dog(s). My best advice? Go slowly through the process. And it IS a process. Let’s face it, it could go either way if you […]

As the saying goes “You don’t get a second chance to make a first impression”. The same applies when introducing a new dog/puppy to your current dog(s). My best advice? Go slowly through the process. And it IS a process. Let’s face it, it could go either way if you just put them together to see what happens. Which is what most people do. It could turn out just fine in the short term, 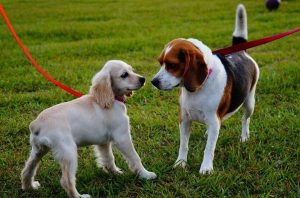 but in the long run it could be building towards a fight.

Taking it slowly means, for the first few days to a week just allowing the dogs to exist around each other. Not interacting and certainly not playing. Have a separate crate/area where, at least the new dog is confined for sleeping, meals and down time (preferably for several weeks) and when you need a break from supervising/working your dogs. Walk the dogs together (preferably you and another person each with a dog). Having the dogs hold a command such as place or down around one another. Having them on leashes that are tied to doors so that they can’t make contact. Working each dog through obedience commands while the other looks on.

After a few days to a week, allow them to touch noses, sniff each other a bit (keep initial interactions brief) then separate them for a bit before allowing them another short introduction. This fragmented initial contact can help to prevent escalation of tension and aggression. Keep leashes loose and relaxed.

Stay quiet during interactions, pay attention to each dog’s body language. If either looks nervous, freezes, or offers hard stares, move the dogs away from each other. Pulling their leashes to the 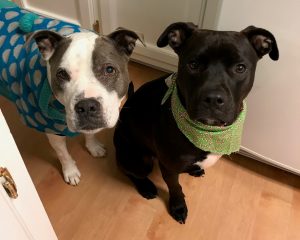 Remove toys/bones, food bowls, or anything that could be valued by your current dog to avoid territorial behaviors.

By taking it slowly you help the dogs relax and feel safe. Remember, the new dog is coming into a situation where it knows nothing about you, the other dog or what the rules of this new household are. Your current dog most likely views this new dog as an invader of his territory. This can be stressful for both dogs.

Everybody wants to let the dogs sniff each other right away and become best friends immediately. But what’s the rush? This is a long-term commitment, right? You’ve got all the time in the world. Going slowly is the best case scenario for helping your dogs to eventually become friends.

Why Pumpkin is Good for Your Dog

How to manage diabetes in cats

How To Care For A Dog With Dementia

Building a Business with a new Pet in tow

Things Humans Do That Annoy Our Pets! Dog stung by a bee? What you need to know

With the onset of spring comes flowers, and with those come bees. Chances are you’ve...

4-D is short for dead, diseased, disabled, or dying animals that are allowed in...

Introduction   India is known as an Incredible country which various astonishing...

Thanksgiving Recipes For Your Dog

I am always on the lookout for new yummy recipes to make treats for the dogs. Thanksgiving...