The Benefits of Mushroom Extracts for Dogs

With so many different mushroom supplements for pets on the market, choosing the right mushroom product for your dog can be confusing. Without doing some research, it’s hard to know if your dog is getting the full health benefits from their mushroom extract or not. As the do-gooder pet parent that I’m sure you already […] The post The Benefits of Mushroom Extracts for Dogs appeared first on CBD Dog Health.

With so many different mushroom supplements for pets on the market, choosing the right mushroom product for your dog can be confusing. Without doing some research, it’s hard to know if your dog is getting the full health benefits from their mushroom extract or not. As the do-gooder pet parent that I’m sure you already are (or else you wouldn’t be reading this post) it’s up to you to make sure your dog is getting the full benefits of medicinal mushrooms.

Is it a mushroom extract or ground up dried mushrooms?

When choosing a mushroom supplement for dogs, you want to choose a mushroom extract (liquid or powdered).

Is the mushroom product from mycelium or the fruiting body?

Choose a mushroom extract that is hot water extracted from the fruiting body, where all the medicinal properties live. Stay away from products that include mycelium, grown on medium (like grains) or fillers.

Where are the mushrooms grown?

Mushrooms are bio-accumulators, which means they absorb toxins from polluted air and earth. Although China has been known for its mushroom cultivation methods, it is one of the most polluted countries in the world. Mushrooms growing in their natural environment in the United States’ Pacific Northwest region* are not exposed to these pollutants and toxins, which is an important factor to consider when choosing mushrooms for dogs.

How are the mushrooms being grown?

This has a HUGE impact on the benefits of mushrooms for your dog. Did you know mushrooms can be grown on things like grain and rice? It’s a cheap and quick way to mass produce. The problem is, well, you are what you eat. So mushrooms that are grown on grains take in the nutrients from those grains, which are severely lacking in the health benefits your dog needs. If the mushroom is grown on a tree, in the wild (where they naturally grow), it’s able to absorb all of the important vitamins and nutrients your dog needs to thrive.

*Note: A lot of people don’t realize this, but there are actually mushrooms growing, wild-harvested, extracted and packaged in the United States! If you do a little research, you’ll see that the Pacific Northwest is a mushroom heaven that’s been supplying us with naturally grown mushrooms for over 2,400 years. It’s America’s little secret, but so important to know about to make sure we aren’t only finding the best mushroom sources for ourselves and our pets, but that we continue to support our local farmers.

The next thing to think about is HOW your mushroom supplement for dogs is produced.

The medicinal compounds in the mushrooms must first be hot water extracted (and alcohol for Reishi) from the fruiting body. This results in a full spectrum of medicinal compounds like polysaccharides (beta-d-glucans, triterpenoids, ergosterol, antioxidants and Vitamins B & D).

Mushroom extracts for dogs are better preserved in organic glycerin, rather than packaged as mushroom extract powders, which can begin to oxidize the moment the package is opened.

And here’s another benefit of mushroom extract tinctures for dogs—they are typically more bioavailable than powdered versions. Since they can be absorbed into the bloodstream upon consumption, they can skip the whole digestive process altogether. This is a bonus for dogs with sensitive stomachs who are searching for a mushroom supplement for dogs.

Choosing the Right Mushrooms for your Dog

Mushrooms are adaptogens and when you put several together or combine them with other adaptogens (cannabis, astragalus root, ashwagandha) they work synergistically to bring the body to homeostasis. Here are some mushrooms with serious benefits:

One of the most well-known and extensively researched immune activators and cancer fighters, Turkey Tail mushrooms boast a powerful resume of potential benefits including boosting immune cell production, containing antiviral components to fight against infections, and preventing inflammation, especially of the upper respiratory, urinary, and digestive tracts. In fact, Turkey Tail has even been approved as a cancer therapy for patients in Japan.

Reishi mushrooms are known as the “mushroom of immortality”, and for good reason. Reishi mushrooms have anti-aging and rejuvenating properties, it inhibits histamine release, induces apoptosis, improves cognitive function, and helps to calm stressors.

Shiitake mushrooms are a delicious, edible mushroom that has also been widely studied for its health-promoting properties. Shiitake is an immunomodulator, is a great liver protectant, provides cardiovascular support, and has shown to possibly extend survival periods if conventional cancer treatments are pursued.

One of the most widely-cultivated mushrooms, Maitake also shows potential benefits for lowering blood glucose levels, enhancing immune function, antioxidant components, and it’s a common remedy for arthritis in Japan.

Is not truly a “mushroom” at all, but a concentrated mass of mycelium and wood precursor, Chaga has been used for centuries to protect the heart, aid as an anticancer remedy, has an anti-histaminic effect, and has antibacterial properties. It’s also known for its free-radical scavenging antioxidant effects.

Related in species to Reishi, Artist Conk is also an immunomodulator and can help prevent infections. It has properties that are anti-inflammatory, and can help support the liver while preventing further damage.

Red Belted Conk has powerful anti-cancer properties. It’s been shown to regulate blood sugar, support absorption and elimination, and has been used as a strong emetic and coagulant.

Referred to as “Nature’s Nutrient for the Neurons” or the “smart mushroom”, Lion’s Mane has been lauded for its ability to stimulate nerve regeneration, which means it helps grow new neurons and create new pathways. This mushroom helps to regulate mood, acts as an antibiotic, an appetite stimulant, and is incredible for memory and cognitive function. This funny looking mushroom has also been shown to improve memory and prevent damage that occurs in the brain during Alzheimer’s Disease.

Growing off an insect host rather than a plant substrate, Cordyceps is rather unique, however it still has the potential to protect the kidneys, increases oxygen uptake in the lungs to effectively deliver it to the tissues, boosts energy levels, and can activate energy and warmth.

Knowing what your dog needs is half the battle. And although one of these individual mushrooms above might sound right for your pet, here’s a good buyer’s tip: Look for a product with several mushrooms in vegetable glycerin, to get the best benefits of mushrooms for your pets. 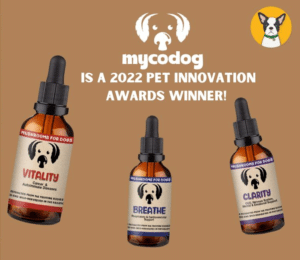 Clarity was designed to support your dog’s cognitive disorder, nervous system, mental and emotional health, formulated with a proprietary water extract of Lion’s Mane, Reishi and Cordyceps, with Bacopa Monnieri and Ashwagandha.

Breathe was designed to help your dog’s respiratory and cardiovascular systems, formulated with proprietary water extract of Cordyceps, Reishi, Artist Conk and Chaga, with Ashwagandha.

The post The Benefits of Mushroom Extracts for Dogs appeared first on CBD Dog Health.

Mushrooms for Dogs with Cancer

How to Treat Shock in Dogs

The Benefits of CBG for Dogs

Why Xylitol Is Poisonous To Dogs & Foods To Avoid

Will My Friend Punxy Phil See His Shadow Today?

Will Punxy Phil see his shadow today on Groundhog Day 2023? You may recall, we visited...

Brown Bear Beams At Camera After Belly Flopping Into Florida...

A grizzly bear belly-flopping into an above-ground swimming pool isn’t something...

With the advancement of AI technology, robotic pets are now being designed to mimic...

Proud to be a Non-Profit with Guidestar Silver Seal of...