Four months ago, I said goodbye to my sidekick of 11 years. Fletch was the inspiration behind Heidi’s Hounds after I spent decades in a corporate career traveling the globe and unable to find peace of mind pet care for Fletch (and others before him). Like everyone else who has made the decision to euthanize […]

Four months ago, I said goodbye to my sidekick of 11 years. Fletch was the inspiration behind Heidi’s Hounds after I spent decades in a corporate career traveling the globe and unable to find peace of mind pet care for Fletch (and others before him).

Like everyone else who has made the decision to euthanize a sick pet, I agonized over making this decision for my little buddy. Fletch was very sick with failing kidneys and early stages of dementia. But as sick as he was, he remained amazingly mobile. Whenever I thought I had a clear conscious about making the decision to euthanize, Fletch would drop onto his back and do his little happy dance at the end of a walk. The decision was killing me.

The evening of June 15, Fletch had a horrible night. He paced for hours in a confused state, walking in circles, moaning, restless and toileting constantly. When the sun rose I knew I needed to humanely put my buddy out of his misery.

Fast forward a few hours later to my veterinarian’s office. I signed the requisite paper work and paid the bill.

What should have been a normal euthanasia started to go downhill immediately. Fletch was reactive and aggressive and it was obvious biting was part of his repertoire that day. I got a muzzle on him with some effort to side step his teeth and snarky behavior. Even with a muzzle he put up quite a fight but the vet managed to administer the initial sedation. Once sedated, the vet left to give us time alone prior to administering the final euthanasia drug.

While Fletch was sedated and “sleeping” in his bed, I took off his muzzle and leaned over to give him a final kiss goodbye … and all hell broke loose. My sick old man, my BFF of 11 years, turned into an animal that was unrecognizable. I remember the blood curdling scream coming from him as he latched onto my face and attacked me over and over again. I was so surprised and it happened so quickly, I did not react to the attack because I believed he would let go when he realized it was me.

I recall Fletch attacking me three times. The last attack he latched onto my left eye and in that moment, I realized I needed to react or I would likely lose the eye. Regrettably, our last interaction after 11 years was me literally beating Fletch off my face. I remember looking down at him and seeing blood everywhere. He was back on his bed and never moved again. The rest is a blur of people yelling, more blood, and strategizing about my own needed medical care.

Regrettably, in the middle of this nightmare, Fletch still needed the final euthanasia drugs. The vet kindly laid me on the floor next to him so I could say goodbye and then sadly I had to leave for the emergency room.

Since then, I’ve had three surgeries on my face and will likely need one or two more revisions on my left eyelid. By law, Fletch’s brain had to be tested for rabies which I knew would be negative (and it was).

I suppose the moral of the story is to listen to your pets at the end of their lives. In hind sight and without emotion clogging my brain, Fletch had become snarky and snappy with me and my husband for months before this incident; behavior that was completely out of character for him. His lifelong fervor for meal time had disappeared and it was a daily struggle to get him to eat.

I think Fletch was trying to tell me it was time to go, but I was unable to make the decision until he was so sick that he was literally out of his mind. It is our job as pet parents to maintain care and comfort, quality of life and to preserve the human animal bond with our pets. I obviously have regrets about my handling of Fletch’s final days but share this with the hope our story helps other pet parents make better, albeit difficult, end of life decisions for their fur friends. 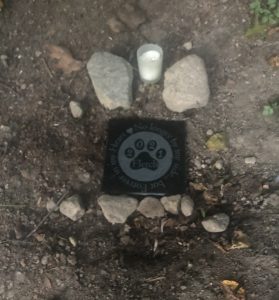 The Impact of the Pandemic on Pets and How We’re Adapting...

Dog Friendly Bars in Charlotte Where You Can Celebrate...

To Give or Not To Give?

Dug is a 2 year old male German Shepherd Cross. He is currently located at Corby,...

Dog stung by a bee? What you need to know

With the onset of spring comes flowers, and with those come bees. Chances are you’ve...

Stress colitis in dogs can happen as a reaction to anxiety and stressors. Any stressful...

Have you recently diagnosed lymphoma in a dog? Has the client declined chemotherapy...