The best tips in positive dog training. If your dog still ignores you, doesn't understand or even has a behavioral problem then you need to apply this simple structure right now. 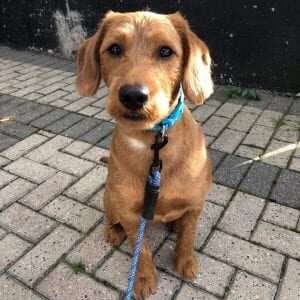 Positive dog training isn’t just the “trendy new thing” in 2022. It really does work, even for problem behaviours.

Have you really tried everything with your dog? Does he still ignore  or even seem generally puzzled? But you know he’s more intelligent than this, so what’s going wrong?

I am a positive dog trainer in Kent and Essex and can guarantee, if your dog isn’t listening to you, then you’re not using these two, very simple, techniques to teach him.

These 2 steps use very basic animal psychology, which makes it impossible to ignore!

It doesn’t matter if you have an older dog, young pup, difficult breed or even a rescue dog. What I am about to tell you is the 2, very fundamental, steps in dog training.

In fact training ANY animal. Just about every trainer and dog behaviourist will be following it and I use it every day too!

Once you understand this simple concept you will be able to train your dog to do (practically!) anything. Without confusion and without frustration from either party. A REAL partnership. Along with this strategy, I also like to use the Calming Signal Language too. This is their own body language which you can learn to read and mimic!

A lot of people, and even some dog trainers, will insist that positive reinforcement training doesn’t work. At least not for all problems. That dogs need to be told off and punished for their bad behaviour.

Unfortunately this comes more from our own upbringing!

It wasn’t so long ago most parents used physical pain to stop their own children from “bad” behaviour. Then it turned to shouting – installing fear – which, both actually, activate the flight or fight response in the brain and NOT the calm logical side that you’re trying to connect with.

It’s the same for our dogs!

When ever I work with a dog, whether it be toilet training, recall or behavioural problems (such as aggression), I always use this as my guide. Because it’s simple AND it works!

It is also easy to teach to owners too. Once they’ve got their head round these steps nothing can stop their progress. 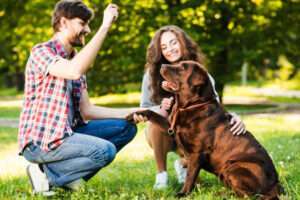 You must give clear instruction.

Do you wonder why your dog doesn’t fetch the ball when you throw it down the bottom of the garden? He runs and picks it up, now what? Why doesn’t he bring it back? Is it “instinct”? Something you didn’t start early enough as a puppy? Or the wrong breed?

This is not true. Dogs, of any breed, can learn fetch at any age.

Do you wonder how service dogs learned to turn lights on or off or ring a bell when they need to wee outside? How is this possible when little Bailey won’t even lie down?

Well the simple truth is you’re probably not being clear enough.

Break. Down. The. Steps! 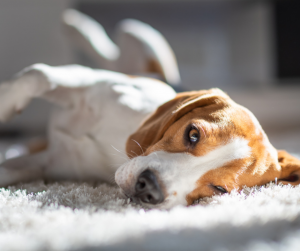 This is known as “shaping the behaviour” you desire.

A dog isn’t going to understand the beginning, middle and end of a command if it’s as complex as retrieving or flipping a switch. To us these behaviours appear to be one step, but they aren’t.

So, what ever you want your dog to do, start to think about each different action you want him to take, within this command.

For example, the first step to fetching a ball is simply to look at the ball. (The next is to touch it).

If you take dog aggression, for another example, you want the dog to first ignore the other dog, not head towards it and not make a noise towards it either.

You may want your dog to act friendly towards all other dogs – even play!

But each of these has a step, until each one is completed there really is no point in moving on.

If your aggressive dog can’t even go within 50 metres of another dog without staring at it continuously, then don’t get any closer. Work on this step first.

You need to break that trance and get his attention.

Your dog must WANT to do it. (If you struggle to motivate your dog listen to this free podcast.)

Take fetch – we assume the dog brings it back to us because he wants to continue the game, because its fun!

It’s also just as fun if YOU walk to get the ball then throw it again. You can shape this behaviour a lot better and faster with rewards included.

This will save you running about all over the place!

Eventually fetch can have the extra rewards removed because the fun of the game is enough to continue it. But if you want to tweak the behaviour (maybe bring the ball to your hand?) adding high rewards is key.

But rewards can be lots of different things. Stroking and a happy voice work great for dogs that just want to please. An exciting game of tug or chase in-between training also works as positive reinforcement.

Positive Reinforcement is the BEST Motivator!

Find what motivates your friend then use it!

But ONLY use it during your training time.

If you’re feeding bits of chicken for every whim or just because they look cute they won’t listen when you need them to. So only use your motivator when you’re working on something. Remember you must reward each little step your dog does for you.

Yes it really is that simple!

Clear instruction and a great reward.

As previously mentioned, this is VERY basic animal psychology and it’s not only simple but effective. The best part is you can apply it to anything you want to train your dog to do, from phobias to fancy tricks. You may be unsure if you’re using positive reinforcement, negative reinforcement (or perhaps even positive punishment!) 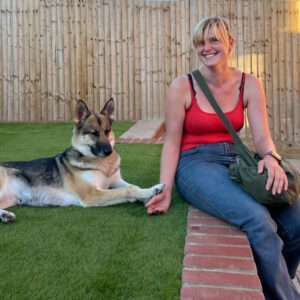 And, if you want to look deeper into dog psychology and behaviour, it’s definitely worth reading about their Calming Signal Language too. This goes into exactly what your dog is saying, both to you and other dogs.

Negative reinforcements and punishments never work as well as positive reinforcement. Using them also spoils the relationship between you and elevates stress in your dog. A stressed animal cannot function as highly as a relaxed one – you can’t train a brain in a state of flight or fight.

Obviously some things will be harder to train than others but always come back to these two steps.

Think; am I being clear enough? And of course; Is the reward big enough?

The best thing about dogs is that they just want to please us. They try so hard to figure out what we want from them it’s high time we started helping them in return.

What are the BEST rewards you’ve found?

Do You Need a Positive Dog Trainer?

Is Your Dog’s Collar Too Tight or Just Right?

Choosing a Puppy - importance of the Breeder

Could Dogs Prevent Allergies vs. Cause Them?

Why Is Your Dog Chewing Up Stuff

What is wrong with my dog?

Is It Bad for Your Dog to Lick Your Feet?

A dog’s tongue is used for everything and it’s an important tool to experience their...

Dress Up Your Pet Day Winner!

Last Friday, 13th January, we held a dress up day as part of National Dress Up Your...